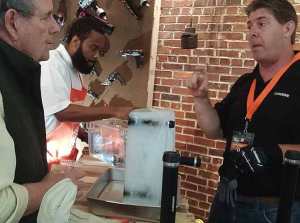 Recently we were part of a group of 80 home improvement editors, writers and bloggers in Atlanta at a Home Depot press event. We visited the massive office complex and toured the Testing & Innovation Lab where their private brands are tested. We saw a Husky ratcheting tie-down, designed to secure loads to a truck or trailer, being put through a test. The tie-down is rated to hold a 500 lb load in place; so to assure it is up to the task they test its breaking strength in the lab. A machine stretches the tie-down until it breaks, which in this case, took over 1500 lbs, more than three times the rated load. In addition to product strength they test for consistent materials to assure the tool meets specifications. The type of plastic and metal used in the tool is tested with a device that does a spectrum analysis of the material.

Everything is tested, the strength of a fabric tool bag was filled with a load of weights weighing many time its rate capacity. All interesting stuff. We joked that the lab resembled the armament lab in an old James Bond movie. We heard the bang of belts snapping, and packages being crushed and dropped from all corners of the lab.

We took a walk through the HD Museum dating back to the late 1970s when Bernard Marcus, Arthur Blank and Pat Farrah, brought new meaning to the term “big box” . The story is that Marcus and Blank were fired in 1978 from Handy Dan’s Home Improvement Centers in California; the next year in 1979 they opened their first Home Depot in Atlanta. Today there are 2,200+ stores in three countries where the orange apron is their familiar icon.

Another day we attended the ProSpective Immersion Tool Event where tool manufacturers like Husky, Ryobi, Milwaukee, Rigid, Makita, Dremel and many more displayed new hand and power tools with hands on demos. Each tool group was in a space framed out in 2x4s where vendors told us about the latest innovations and new design features. We picked up tools, used them and caused quite a ruckus getting a feel for what the tools can do. This was not a quiet event with powerful drills, saws, sanders and grinders working out. And the smell of freshly cut lumber, sawdust and sanded wood added to the buzz creating a realistic workshop atmosphere.

We came away impressed that the Depot is more than a mega hardware store. Their behind-the-scene testing gives them the confidence to stand behind their products.

Visit us at www.diyornot.com to find the cost of home improvements and compare doing it yourself with hiring out the job.