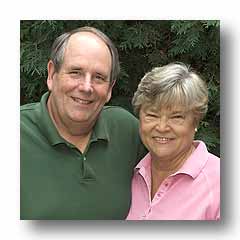 It’s hard to believe our newspaper column Do It Yourself or Not has been online since 1999 but we know it’s true.  The Tribune feature has been in newspapers since 1987 and continues today.  But when we sold HouseNet, our first website to R. R. Donnelley, we continued writing our column and launched its website edition.

The idea for the feature came to us after attending a syndication seminar in New York City. We had been renovating houses and writing about it for years and wanted to take the concept to newspapers.  Our experience of being in the trenches taught us that even though you can save money by doing it yourself, it wasn’t always the best idea.  We developed a database of the cost of projects so we could analyze the cost vs. time vs. talent equation when it came to home improvement projects.

While we didn’t know what to expect at the syndication seminar we were surprised to learn that half of the participants were artists with ideas for cartoons, the rest of us were writers.  We didn’t meet any other home and workshop writers but we did come away with an idea gleaned from one of the panel members, all editors at major syndicators like Tribune, King Features and Los Angeles Times. The editor said he could sell a weekly feature that a newspaper reporter could not produce, suggesting that a saleable feature was niche information a reporter didn’t have the time or expertise to research and create on a weekly basis.

Our “aha” moment came on the return drive home when we realized the cost of an improvement job was something we knew a lot about, but never saw it written about. So we focused a weekly feature on individual job costs that compared doing it yourself with hiring a contractor. Today the print version is syndicated by Tribune Content Agency to newspapers but the online editions www.diyornot.com and http://www.m.diyornot.com have a much larger audience in the online world. We marvel at the fact that in 1987 when we began writing the column there were 75 Home Depot stores in the U.S. and today there are 1,974 and many more worldwide. Who knew we’d be able to ride the do-it-yourself craze all these years? Not us.

Gene and Katie Hamilton are authors of 20 home improvement books and creators of www.diyornot.com, a website that compares the DIY and contractor costs of hundreds of repair, decorating and remodeling projects. Their weekly column Do It Yourself or Not is syndicated by Tribune Content Agency.